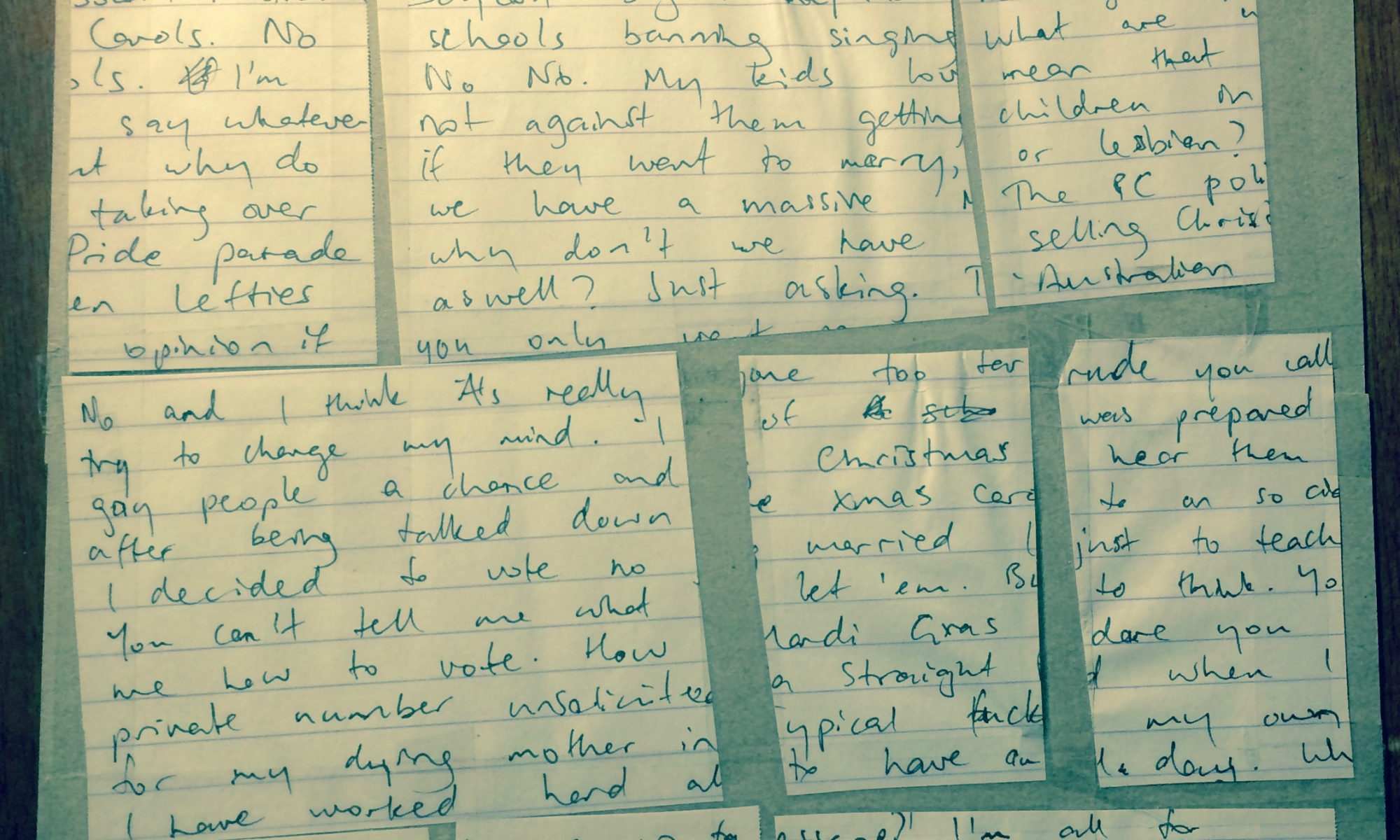 What do you do when there’s an issue that’s so baffling, overwhelming, and all-pervasive, you don’t know what to say? When everyone is talking about it, but no-one is making sense, and the answer seems so obvious it you think you must have slipped into an alternate dimension where people need to debate it at all?

That’s how I felt about the Same Sex Marriage postal survey in 2017; the Australian government’s weasley way of dealing with a matter of basic equal rights. It opened up people’s families and lives for public comment and critique, and it got ugly, as we knew it would. As the survey went on, I felt increasingly dumbstruck by the social media vortex that drew us ever deeper; I wanted to respond, but knew that whatever I had to say, had already been said.

After a day on the phone making calls for the ‘yes’ campaign (I lasted a pitifully short time, and realised too late that this is the sort of exercise you need to do with a good support network around you), I was overloaded, and I couldn’t sleep.  That’s when I remembered cut-ups.

Developed by William Burroughs and Brian Gysin in the 1950s, cut-up poetry is a profound response to our overloaded world, with a surprisingly simple method. Here it is, in Burroughs’ own words:

“Take a page. Like this page. Now cut down the middle and cross the middle. You have four sections: 1 2 3 4 … one two three four. Now rearrange the sections placing section four with section one and section two with section three. And you have a new page.”

Paper, scissors, and glue. That’s all you need to make a poem, and the results are often surprisingly good. It’s a method of exploration, of revelation, of discovery. It reveals new, unintended meanings. It points out what we cannot see about ourselves.

So, in response to the utter absurdity of the Postal Survey, I cut it up. I took a piece of A4 paper and copied on it, from memory, all the comments I had heard on the phone or read on Facebook during the day. I thought I would have to go look them up, but I found they were all too clear in my memory; I easily filled the page with only the negative discourse I recalled from that one day. (This is ‘the brain dump’ – a good way to start on any idea that’s stuck in your head).

Then I cut the page in half. Damn, that felt good! I cut it a few more times, then spread the fragments out and started to re-arrange them. Before long I had lots of new sentences, phrases and words, which were of course total nonsense… but it was interesting. It was a new text. And as a method of responding to a social justice issue, I reflected, it made a lot more sense than the postal survey did.

Here’s Burroughs again on the results we can expect in our cut-ups:

In this case, I think the ‘something quite definite’ revealed in the poem is the strange subconscious thought-process of a nation. We should not have been forced to debate this, but we did; clumsily, painfully, arrogantly, and in poor taste. The mere compulsion to declare and stand up for our values was an experience we, as a nation, found truly uncomfortable, on both sides. I think this comes out in the painfully twisted syntax of the fragments: “isn’t that I decided not too”,  “you can’t tell me what”, “that them a lesson”.

Just in case you’re wondering how much of this poem I actually composed or interfered with, here is that cut-up text I made in the middle of the night, on 25 September 2017. The line spacing and punctuation was added to emphasise the fragmentary nature of the found text, and the fragmentation of discourse in the Same Sex Marriage debate. I don’t have copies of the original found text, but a few of the social media outbursts recorded here were certainly hard to forget: comments like “I get a text message after I have worked hard all day and I’ve been caring for my dying mother”; “I decided to vote no just to teach them a lesson”; and, bizarrely, “Boycott BigW, they are banning Xmas trees”. I don’t know why people were so interested in BigW that day, but there you are.

Who is Sarah Temporal?

I am a performance poet and poetry educator from the Tweed region, Australia. Follow for news on my projects, educational resources, and writer’s tricks for your toolbox.